Visitors 1497
Modified 6-Aug-21
Created 27-Oct-11
48 photos
This gallery represents a portion of an exhibit I put together to mark the 10th anniversary of the events that took place In New York on September 11, 2001. The photographs were exhibited to the public at a gallery in Marietta, Georgia, followed by another exhibit at a gallery in Kennesaw, Georgia. The exhibit was well-received by those who experienced it in person, and I was encouraged to try to share it with a larger audience. This is my effort to try and share these photos. For those who saw them in person during the two exhibits, much of the reaction was heart rendering, as so many remembered that day in their lives. The perennial question has been, "Do you remember what you were doing on that day?"

My story about 9/11 goes back a few weeks prior to that fateful day. I was in New York City attending a national arts conference and had an opportunity to join a guided tour of significant art locations in Lower Manhattan. The tour concluded at a reception in a studio space on the 92nd floor of the North Tower, World Trade Center.

The studio space was called "World Views," and occupied a corner of the 92nd floor, allowing views from two sides of the tower. Fifteen artists used this space as part of a residency program sponsored by the Lower Manhattan Cultural Council. The idea was that these artists might be inspired to create their art based on the "views" allowed at that height over the city.

I used this opportunity to take some shots out the windows using both Kodak Ektachrome and Kodak infrared film. I was able to capture some of the feeling of being at this great hight, looking outward and downward (and occasionally zooming the lens a little).

For the past ten years, I have wanted to do something with thiese images. My exhibit, coinciding with the 10th anniversary of 9/11, was this opportunity. My wife and I returned to New York City the third week of August of 2011, with the purpose in mind that I would get images of the progress of the memorial and rebuilding efforts at Ground Zero. This experience was truly moving for both of us.

The "Towering Views" I captured ten years earlier from the World Trade Center still make me pause. I hope in seeing these images, you too, will feel something and reflect on how of our lives have changed from that event ten years ago.

To view these images with the captions and supporting text, it is best to click on them individually, rather than use the slide show feature. Also, please enter your reaction/comments in the "guest book" portion. 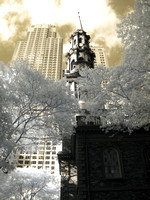 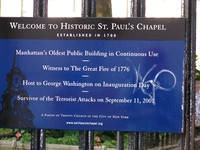 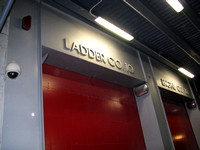